The dataset comprises mostly precisely-located records collected through various surveys by individuals and other organisations across Britain and Ireland of beetles associated with the freshwater habitat. These include strictly or predominantly aquatic families: Sphaeriusidae, Gyrinidae, Haliplidae, Noteridae, Paelobiidae, Dytiscidae, Helophoridae, Georissidae, Hydrochidae, Spercheidae, Hydrophilidae, Hydraenidae, Elmidae, Dryopidae, Limnichidae, Heteroceridae, Psephenidae, as well as species associated with wetlands in other families of the Coleoptera. Records have been submitted since 1979 to the Water Beetle Recording Scheme for incorporation into a single database. Earlier records compiled on card indexes by the late Frank and Jack Balfour-Browne and other workers before 1979 are also incorporated into the database. The dataset also contains a small number of fossil (post-glacial) records. Note that that NBN data-base uses about 280k records whereas at November 2007 the data-base stands at 348k records, with a massive improvement in coverage of Ireland.

The whole of the United Kingdom and the Isle of Man, and much of the Republic of Ireland.

Records will have been obtained for a variety of reasons: as a result of systematic surveys; aquatic habitat sampling procedures; for habitat and site assessments; as a part of larger studies of sites or areas for biodiversity or conservation purposes; in process of carrying out consultancy contracts; and especially through individuals carrying out studies for their own local purposes or interest.

All records have been vetted by the Scheme Organiser. Many of the records, especially since 1979, have also been substantiated through checked specimens either by the Scheme Organiser or by other experts. Frank or Jack Balfour-Browne checked many of the earlier records. Data were compiled by the Scheme Organiser onto a Recorder database, and have been checked and validated prior to being submitted to the NBN Atlas. However, coverage of the country has been uneven in different places over time, and interpretation of species distributions needs to be approached with care. While many species show a probably accurate representation of their distribution and occurrence, other species, particularly commoner ones, are known to be under-recorded in many areas. Absence of a record of a species from an area may or may not indicate its genuine absence in a locality. While every attempt has been made to ensure the accuracy of records, the Recording Scheme Organiser cannot vouch for the authenticity of every record contained in the database.

Various, ranging from systematic sampling procedures, through to casual collection and observation.

Looking up... the number of records that can be accessed through the NBN Atlas. This resource was last checked for updated data on 13 Dec 2021. The most recent data was published on 13 Dec 2021.

Click to view records for the Water Beetle Surveys from Britain and Ireland resource. 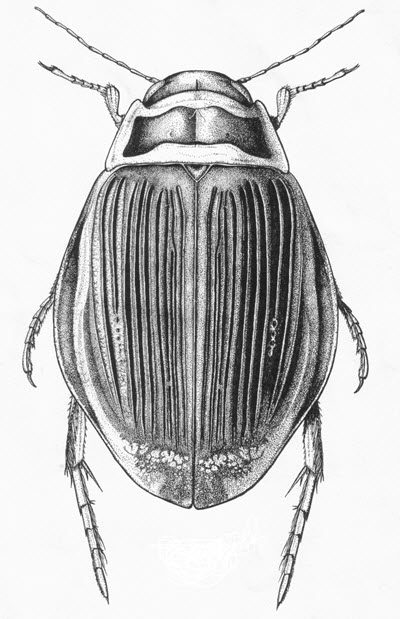